Gaudreau Dazzles in Victory over Germany

The immensely skilled and highly crafty 20-year old forward from Carneys Point, N.J., scored a scintillating, highlight-reel goal, while adding three slick assists. Gaudreau’s four-point effort propelled the U.S. to a victory that they needed to ensure a higher seed in Thursday’s quarterfinal.

The five-foot-eight Gaudreau – who made his NHL debut on April 18, scoring on his first shot for the Calgary Flames – was a magician with the puck.

“He really sees the ice well; he’s really deadly on this big ice with time and space,” said U.S. captain Justin Abdelkader, who scored twice off Gaudreau assists, the second goal in the third period being the game winner. “It’s a big tournament for him with training camp next season (with Calgary) and I’ve seen him get better with more confidence.”

“It was nice to help the team out offensively,” Gaudreau said of his four-point afternoon. “I have a lot of great linemates, playing with older guys like (Tim) Stapleton (31) and Abdelkader (27), and they’ve definitely been helping me out here down the stretch.”

Gaudreau swiftly cut around multiple German defenders, adding a sleek toe-drag move, before roofing a shot past the goalie that gave the U.S. a 4-3 lead early in the third period. No. 53 and company raised their arms in celebration, but because the puck ricocheted so quickly back onto the ice play continued. After a stoppage and video review more than 90 seconds later, Gaudreau was finally credited with the crucial power-play tally.

“I was trying to make a pass backdoor first and I saw they were holding the middle, so I brought it in, made a little move and got a good shot off,” said Gaudreau about the goal. “It was a good screen by Abby (Abdelkader).”

With ten points (2-8), Gaudreau leads Team USA (4-1-0-2; W-OTW-OTL-L) in scoring with the seven-game world championship preliminary round now in the books.

“This is my first opportunity to work firsthand with Johnny and he’s a very, very impressive talent for the United States,” said U.S. head coach Peter Laviolette of Gaudreau.  “Not just what you see on the ice, but he’s a terrific person off the ice. On the ice, he displays a tremendous amount of talent with his offensive skills.

“He’s a very smart player and battles and competes very hard for his size. It’s been my pleasure to get to work with a guy like that,” Laviolette said.

Gaudreau – the 2014 winner of the Hobey Baker Award starring for Boston College –  continues to prosper on the international scene. Last year, Gaudreau led all scorers with seven goals as the U.S. claimed gold at the IIHF World Junior Championship in Ufa, Russia.

“He’s one of those guys you don’t like playing against as a defenseman,” said Seth Jones of his 2013 U.S. National Junior Team colleague. “His feet are quick and he can turn you inside out. He played great for us tonight.”

Over three seasons at Boston College, Gaudreau accumulated numerous honors and helped the Eagles to an NCAA title during his freshman year.

“He did it all year at school, and I expect nothing less from him here,” said Gaudreau’s Boston College linemate Kevin Hayes, who at times, has been paired with him in Minsk. “He’s one of the best players in the country and he’s just being Johnny doing ‘Johnny things.’ Everyone thinks he’s really small, but he uses it to his advantage. No one really hits him and he spins off guys like I’ve never seen.”

As seen at Minsk Arena on Tuesday, Gaudreau is elevating his game – now leading all scorers at the tournament in assists with eight – and his offensive firepower and dynamic playmaking are providing a timely boost to a youthful U.S. squad as elimination round play begins.

Regarding playing in Minsk and having the chance to win a second world championship medal in two seasons as a member of Team USA, Gaudreau said: “I’m just really enjoying my time here over the past week-and-a-half. I’m excited and it should be fun” 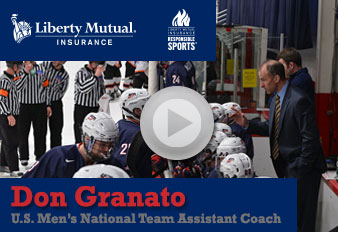 Earlier this year, Housley was the head coach of the U.S. National Junior Team that won the gold medal at the 2013 IIHF World Junior Championship in Ufa, Russia.