MINSK, Belarus — It was a tough night across the board for Team USA as it lost its first game of the 2014 IIHF World Championship to Russia, 6-1.

Russia outscored the U.S. 4-1 in the second period, despite being outshot by the U.S. 17-7 over the 20-minute frame. Goaltender Tim Thomas, who entered the contest having stopped 47 of 50 shots in Team USA’s opening two victories, was replaced by backup David Leggio following Russia’s fifth goal of the game, 11 minutes into the period.

“We were on our heels all first period and in the second period we had some good shifts, but just turned the puck over too much,” said U.S. captain Justin Abdelkader, who scored his team’s lone goal early in the second period.  “We didn’t come here mentally prepared. I have to do a better job getting the guys ready in the locker room before the game.”

“Russia played a really good game tonight; I don’t think we were at our best in the first period and not mentally sharp in the second,” said U.S. head coach Peter Laviolette following the defeat at Minsk Arena in front of a highly enthusiastic pro-Russian crowd. “Tonight wasn’t our night, but we’ll learn from it and be better for it.”

It was a night that also saw Alexander Ovechkin beat Thomas on a penalty shot late in the first period, an opportunity awarded to the Russian captain on a questionable call.

Despite the five-goal differential on the scoreboard, the U.S. managed to outshoot Russia 40-23. However, fourteen of the shots came in the third period with the game out of reach.

“I think at times the puck didn’t bounce our way tonight,” Laviolette said. “We’ve got a young team, like most teams in this tournament. They’re young, but we have a lot of faith and trust in this group.”

“It is early in the tournament and Russia is a very good team, definitely one of the best in the tournament,” Abdelkader said. “We’re a young group; we can learn from this and hopefully be a better team because of it.”

Team USA seeks to improve upon its 2-1 preliminary round record against Latvia on Thursday and Kazakhstan on Friday. 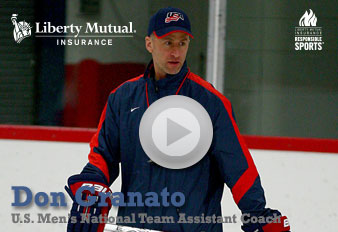