U.S. Getting Set For Semifinal Matchup With Switzerland Tonight in Stockholm

Game Notes vs. Switzerland (May 18) 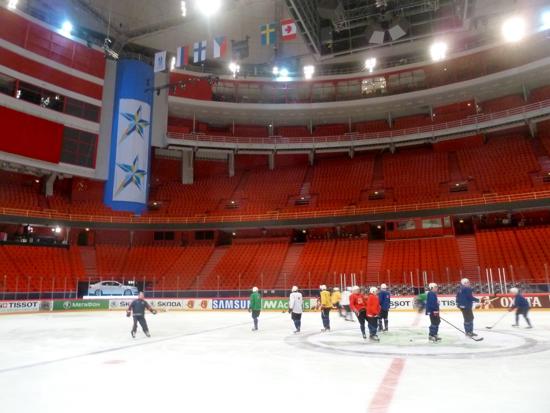 Team USA practice this morning at The Globe in Stockholm.

STOCKHOLM, Sweden -- Having made the trip across the Baltic Sea from Helsinki to Stockholm, Team USA (6-2) continues its journey at the 2013 IIHF World Championship versus undefeated Switzerland (8-0) in the semifinals tonight at the Globe Arena.

The U.S. hopes to carry the momentum of Thursday night’s 8-3 quarterfinal round victory over Russia, while Switzerland enters the contest having knocked out the Czech Republic.

“We’re all feeling good and we’re a pretty confident group,” said U.S. defenseman Justin Faulk, after the team’s Saturday morning skate on the Globe Arena ice. “Obviously, the stakes are a little higher, but we’ve done a pretty good job preparing for every game thus far and we’ll take it as every other game and just come out ready to play.”

Switzerland boasts the best power play of the tournament, having capitalized on 10-of-28 opportunities (35.7%), while the U.S. has been the second most productive with the man-advantage finding the net on 9-of-27 chances (33.3%).

“It goes back to playing with discipline and part of that is staying out of the box,” said U.S. Head Coach Joe Sacco. “They have the number one power play and we have number two, so I’m sure they’re going to be telling their players the same thing. Not giving the opponent numerous power play opportunities is critical.”

U.S. captain Paul Stastny enters this weekend’s “Final Four of World Hockey” tied for second in the tournament with 13 points (6-7-13), while his linemate Craig Smith is tied for fourth with 12 points (3-9-12).

“Stastny and Smith are really easy guys to plays with,” said David Moss, who plays on the left wing of the line and has four goals and two assists in the tournament. “Stastny is a great centerman who makes a lot of great skill plays and Smitty and I just try to get it out of the corners and get it to him. We’ve been clicking and hopefully we keep it going.”

Josi is one of just two NHL players skating for the Swiss. Fellow defenseman Raphael Diaz, who recently joined the team after the Montreal Canadiens were eliminated from the playoffs, is the other.

Sturdy defenseman Erik Johnson, along with Stastny, are the two members of the U.S. squad that were part of the United States’ 2010 Olympic team, which captured a silver medal in Vancouver.

“They definitely gave us a little bit of trouble in some close games in Vancouver,” said Johnson. “We know they’ve played together for awhile and obviously they have some chemistry. They try to get you caught up in a neutral zone trap and play a pretty well structured game. They sit back a little and it makes for a little different look, but we’ll be ready for them for sure.”

In their eight victories, the Swiss have received balanced scoring and have tallied a tournament-leading 29 goals while allowing just 10. The United States has scored 24 times, while giving up 16. Ten Swiss players have contributed five or more points in the tournament, while five have done so for the U.S.

“They have some good players, but they do it by committee,” Sacco said. “I think if you look at our team, we are very similar to that. We have a couple of guys leading the way, but we’ve done it as a team and Switzerland does too. It should make for a good match.”

Switzerland, whose most successful years in international hockey came in the late 40s and early 50s, has not medaled at the world championship since 1953, when it won bronze at home in Zurich.

With a win this evening in Stockholm, the United States would secure its first medal at the world championship since taking bronze in 2004 in Prague. The last time the U.S. played in a world championship gold medal game in a non-Olympic year was in 1950, when it lost to Canada in London.

The winner of tonight’s contest will play for gold tomorrow versus the victor of this afternoon’s Sweden and Finland battle, while the losing team will compete for the bronze medal.

“I don’t think the guys are satisfied just being here,” Moss said. “We’ve played pretty well together to this point and we’ll be focused on the task tonight.”

What: USA vs Switzerland (Semifinals)